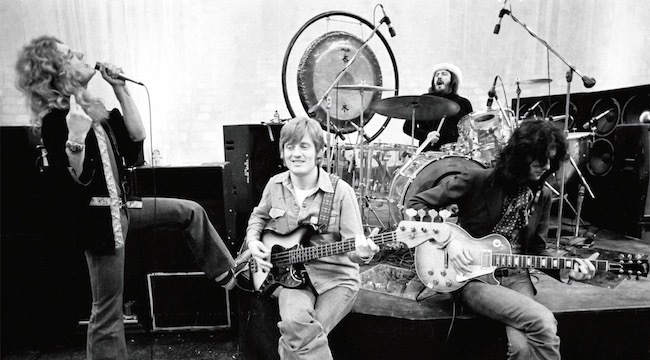 Despite their status as the biggest band on the planet throughout the 1970s, the kind who shuttled from sold-out arena show to sold-out arena show in a private jumbo jet, Led Zeppelin didn’t really have that large of an entourage. They were an intensely private and largely press-averse group. Only a select few individuals ever made it into the inner sanctum. One of just a handful of folks to gain their trust was photographer Neal Preston. Preston shot the band for the first time in 1970 at a show at Madison Square Garden when he was still just a teenager.

He photographed them several more times in the early ’70s, before eventually securing a position as their sole, official photographer during their massive tours in 1975 and 1977. Though he’s worked with some of the most iconic rock groups of all-time in the years since, including Queen at Live Aid and Bruce Springsteen on the Born In The USA tour, it’s still the time he spent with Zeppelin that has defined his career.

“It cemented my place in the pantheon of music photographers like no other,” he said. “They had other people shoot them but, I’m the only person ever officially hired to be their tour guy. If you have a job like mine, it will never hurt to have that at the top of your resume… what it said to every other band was, if this guy is good enough for Zeppelin, he’s good enough for you.”

Today, Led Zeppelin is releasing their first-ever official book. Led Zeppelin By Led Zeppelin is a massive, 400-page coffee table tome, filled with glossy, high resolution shots of the band at their decadent, high-flying best, with annotations written by Jimmy Page, Robert Plant, John Paul Jones, and quotes from the late, great John Bonham. Among the many shots, most of which were taken by some of the most notable photographers of the era, you’ll find a trove of pictures taken by Preston, who got as close to the band as anyone during their heady time as the undisputed kings of rock and roll, when a three-hour gig filled with smoke, lasers, pyro, 20-minute drum solos was considered a light night of work.