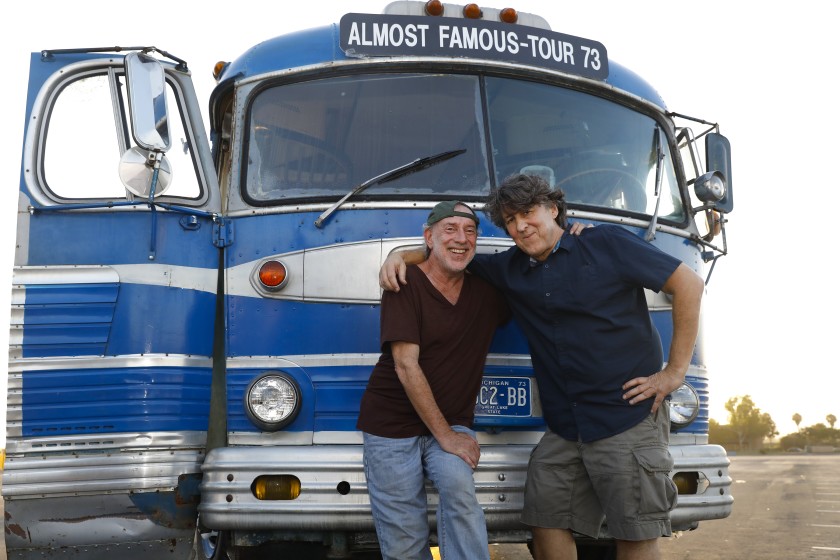 The ghosts of concerts past were everywhere during Neal Preston’s recent 12-hour photo shoot with the cast and director of the Old Globe’s musical adaptation of “Almost Famous.”

The musical is based on Oscar winner Cameron Crowe’s acclaimed 2000 film about a budding young music critic’s love affair with rock ‘n’ roll in the early 1970s. That critic was Crowe, who was in his mid-teens when he became the youngest writer for Rolling Stone magazine. He wrote the script and co-wrote the lyrics for the Old Globe’s production of his film, in which the main character is his teen-aged alter-ego, William Miller.

Crowe and Preston, one of the music world’s most celebrated photographers, became lifelong friends and collaborators after meeting at a Humble Pie concert at the San Diego Sports Arena in 1972.

It was the first of many shows the two attended at the same arena while on assignment for Rolling Stone. And it is the same arena they reconvened in 1999 to take promotional photos for the “Almost Famous” film, and — 20 years later — in late August for the Old Globe photo shoot.

Crowe and Preston worked together on an array of Rolling Stone feature stories before the photographer signed a 25-year contract with Time-Life that saw him do cover shots for Time, Newsweek and other magazines. Preston’s photos of Bob Marley, Madonna, The Who’s Pete Townshend, Fleetwood Mac’s Stevie Nicks, Led Zeppelin’s Jimmy Page and Queen’s Freddie Mercury are among some of the most iconic in rock history.

That Preston is a legend in his own right among musicians and other photographers is a matter of record. But he is happy to remain behind the lens.

“I’m not famous. I’m the guy who presses the button,” said Preston, a New York native who moved to Los Angeles in 1971.

“I’ve had people tell me I’m the best photographer, and the worst, and neither means anything to me. If my pictures move people and they derive pleasure from it, that’s what matters to me.”